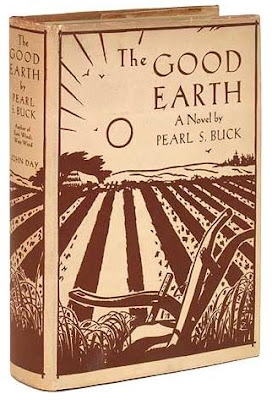 I hope you all had a lovely weekend. Mine was relaxing with just a bit of work. I am feverishly trying to get my holiday cards designed. (they’re almost done, this week, I promise) I also started the second book in my 12 books & 12 months project which puts me way ahead of schedule. This is mostly because I found The Good Earth too good to put down.

I don’t want to review the book or give you a plot summary because you can find plenty of that else ware online. I would like to convey what the book meant to me. The book starts with the relationship between the main character and his new wife. The book was published in 1931 so the contrast between what it means to be a wife today and in this story is sharp. O-Lan, the wife is nothing more than a cook, dishwasher, housekeeper and baby maker. There is little tender relationship between the two although Wan Lun is proud that his woman (that he owns) is good at these tasks, works hard and bears his sons.

So I spent a lot of the first of the book grateful for progress. Although I am a cook, a dishwasher & a housekeeper, I know that I have far more worth to my husband than those things alone. Even though I did have a lot of respect for O-lan and her commitment to her family & husband, she was nothing more than a slave.

The family at the beginning of the book goes through a time of great prosperity largely due to O-Lan and her management of the home & children. But a great drought comes and causes the family to move from their home since they are farmers and make their living off the land. The family has to beg for food in the big city and work jobs that pay barely enough. But eventually they are able to make it back home to their land that they refused to sell and again prospered. I so enjoy it when I can understand that there are much worse situations to be in than whatever trivial problem I’m having at the moment. I also love to hear of people persevering and coming through the other side.

Mostly, as the title suggests the book is about the main character’s relationship with his land. It is his comfort zone, his source of wealth and really the source of everything he holds dear. He is willing to give up anything in order to keep his land. I admire his dedication and hard work on the land and his resolve and commitment to keeping it.

There is a lot more drama in the book as well which was not as interesting to me as the rest but it made for a great story. The writing was so exceptional that I found myself reading 100 pages at a time in the middle of the night. I would easily put this book in my top 10.

So now I am on to book 2. I started it last night and I feel that I may have inadvertently made too large of a content jump. All Souls is about rich kids in NYC. I have to admit, I’m skeptical but it is highly acclaimed so I’m going to give it a go. I’ll meet you back here (probably sooner than later since it’s a pretty short book) with my thoughts on it.

MADE IN THE USA GIFT GUIDE: FOR MOM

SCENES FROM A PARADE

SCENES FROM THE HONEYMOON