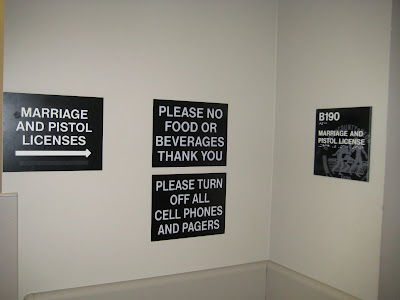 okay, so I am posting pictures of us going to the courthouse, since I had a few requests. I really had no idea what it would entail. So we went down to the courthouse with a few family members on Friday afternoon. First we had to go to the office where you can get your marriage and pistol license at the same time. We filled out the forms and paid our $56 and then they sent us upstairs to see the judge. Once we go there, there was quite a line, so we were settling into our seats when a judge came out and asked if anyone wanted the “express lane”. The following picture is what happened next.

So we got into line with everyone else. The “express lane”, it turns out, is when the judge asks “Avis, do you want to marry Vince?” and then “Vince, do you want to marry Avis?” And then he shook our hands and said “congrats”. This made me really happy because I was a little nervous about what they would make me say. As you might be able to tell, I’m not really into the whole wedding thing, so I was hoping to say as little as possible and I think I got my wish.

And then we went outside to take pictures.

BACK FROM BEACH ERA

WHY ARE WEDDING INVITATIONS IMPORTANT?